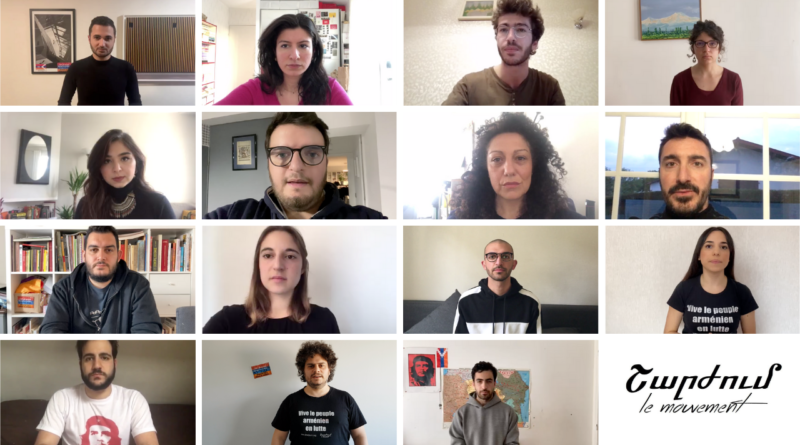 This year, the 24th of April has a particularly bitter taste. The Artsakh war reminds us, to what extent for now more than a century we have been alone in the face of imperialist policies and criminal wars who want the disappearance of the Armenian people.

Since the 19th century, the Armenian people have suffered systematic and systemic persecution in the lands where they live. Forced to flee, to be massacred, or to live without their identity. Victim, stateless person or refugee, this is the fate they had in store for us. The lands of Armenia are continuously shrinking.

The 24th of April 1915 marks the climax of this phenomenon. This date marks the beginning of the largest mass cleansing that the Armenian people had to endure. Today, Turkey is no longer content with denying, or relativising. Today, the Turkish fascist regime glorifies and claims the heritage of the perpetrators of the Armenian genocide.

Even if the genocide is the most famous moment of this extermination attempt, it is not the only one. We cannot forget the Hamidian massacres, the massacres of Adana, Shushi, Kirovabad (Gandja), or the pogroms of Sumgayt, Baku, or the massacre of Maragha. We cannot forget that from Sassoun to Nakhitchevan, there are no longer any Armenians today. You only have to look at a map to see how the Armenians disappeared from the land they had inhabited thousands of years

The 2020 war followed this genocidal logic. Azerbaijani war crimes against civilian infrastructure were a daily occurrence. In Hadrut, Talish, Karmir Shuka, Taghavard, civilians were massacred. This is not collateral damage, but a continuation of the policy of the Turkish and Azerbaijani states, as it has been for over a century.

This war has reopened many wounds. The exodus of Armenians during the war, the dramatic situation of refugees, the total lack of support from the international community.

The end of the fighting should not lead us to believe that peace will follow. As for more than 100 years, those who want Armenian lands are relentlessly trying to wipe us off the map. They already claim Syunik, tomorrow they will explicitly claim Yerevan and all of Armenia.

Running away is not a solution. In France, Turkish fascists have marched several times in an attempt to intimidate us. Our schools, cemeteries, churches, places of memory are desecrated in Artsakh, Turkey, but also in the United States and Europe, including France. The fascists and imperialists will not leave us in peace until we are gone.

The great powers want to see us docile and buy us with memory. As in 1915, they have not protected us and will not protect us. It is up to us to ensure our own defence and we affirm today more than ever that our dignity is priceless and will not succumb to the good intentions of those who reach out to us but arm our oppressors.

The War for Self-Determination of Artsakh and the most fundamental rights of our people has shown that Armenian men and women know how to defend themselves and face their oppressors with their weapons in hand. To live free or to die, this is the choice that was imposed on us.

Turkey has shown us once again that it will not respect the law, which is often an instrument for the powerful, but which is meaningless once the first bombs fall on civilians. We know that no one will come to the rescue of our people, no state will open the doors of its courts to them. Our Resistance will be our Justice.

This website uses cookies to improve your experience while you navigate through the website. Out of these cookies, the cookies that are categorized as necessary are stored on your browser as they are essential for the working of basic functionalities of the website. We also use third-party cookies that help us analyze and understand how you use this website. These cookies will be stored in your browser only with your consent. You also have the option to opt-out of these cookies. But opting out of some of these cookies may have an effect on your browsing experience.
Nécessaire Toujours activé
Ces cookies sont nécessaires au bon fonctionnement de notre site et vous permettent d\'utiliser les fonctionnalités de base. Ils ne stockent aucune information personnelle.
Enregistrer & accepter